You have probably already seen “The Man Your Man Can Smell Like,” along with more than 15 million other YouTube viewers and countless traditional TV Superbowl fans.

The 30-second Old Spice commercial that features actor and former NFL player Isaiah Mustafa is wildy successful in the ranks of viral social media campaigns and within the ad industry itself, winning awards like the Film Grand Prix at the Cannes International Advertising Festival and Best in Show single commercial at the AICP Show. 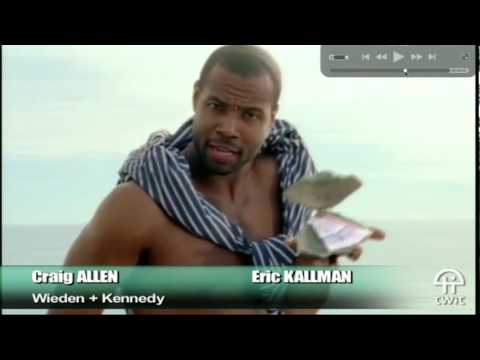 On July 16, 2010 Shoot published Emmy Valued As Barometer of Entertainment, Representing A Perspective Outside The Traditional Ad Industry Awards Circle. Ad agency executives continued patting each other on the back:

“The Emmy nomination, though, quipped W+K creative directors Jason Bagley and Eric Baldwin, offers an extra dimension. “It’s the only award our parents know,” said Bagley. Baldwin added, “This was the first time my mom said she was proud of something I did professionally and really meant it.  She knows what an Emmy is.”

While the recognition from awards competitions has been a kick, Baldwin said that nothing beats “the excitement of doing work that people are enjoying and talking about. I can’t imagine any award being more exciting than that buzz and bringing the brand into everyday discussion. I’m much more interested in that.”
With tongue firmly planted in cheek, Bagley countered that by contrast he is “much more interested in the awards.”

In a more serious vein, Bagley and Baldwin credited the core creative W+K team of Craig Allen and Eric Kallman for coming up with the concept and the character in response to a brief containing a goal of talking to and connecting with women about their men’s body wash. “They both [Allen and Kallman] deserve major props,” said Baldwin.

But today’s news reports another side of this glowing success story, Old Spice sales drop 7%, despite hot ads. Speculation on why, is all over the charts from appealing to the wrong gender, to the simple fact that Old Spice is, well… old – “something grandpa used to wear.”

Watch the ad and then tell me the name of the product that you should be left with an irresistible craving to go out and buy. I had to do some key research to discover that the Old Spice product being advertised is called Red Zone After Hours Body Wash. If this 30-second tale is truly worthy of recognition as an advertising vehicle, then what does it successfully market?

The Primetime Commercial Emmy award winner will be announced at the Academy of Television Arts and Sciences’ Creative Arts Emmy ceremony on Saturday, Aug. 21, at the Nokia Theatre in Los Angeles.